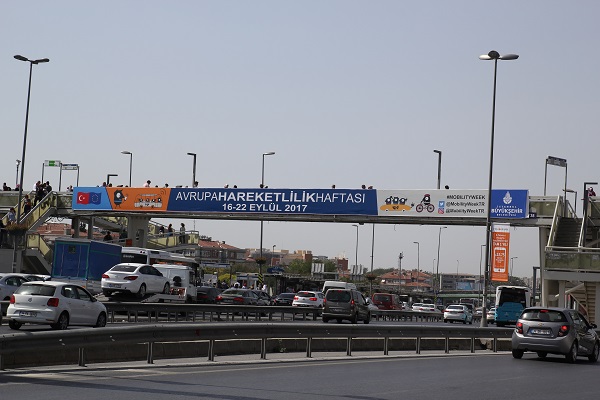 European Mobility Week is an international event which is celebrated every year between 16th and 22nd of September. It is celebrated in order to encourage public authorities to develop environmentally friendly and sustainable transportation measures and to encourage citizens to use green transportation solutions and to create healthier cities. Participating city authorities lead and inform their citizens about infrastructural regulations and improvements that they realized in their cities for green mobility management, accessibility and cycling throughout the week.

Within the scope of the European Mobility Week, Istanbul Metropolitan Municipality (IMM) organized a bunch of activities to raise awareness about mobility week as well as to inform public about municipality’s services which can be considered within the context of this year’s theme, i.e. "Clean, Shared, Intelligent Mobility". Campaigns and promotional activities carried out throughout the week were published via various communication channels.

European Mobility Week advertising banners were displayed and shared with public via multiple channels. They were displayed on gantries (on widely used highways of Istanbul), on İBB CepTrafik mobile application’s opening screen which is IMM’s mobile application used by more than 1.5 million active users, on IMM’s internet-based traffic application (Traffic Density Map) which has around 25K daily visitors, on digital advertisement displays in multiple locations, on information displays located in metros and metrobuses.

Promotional videos and posters about the week were presented to citizens in public transport vehicles such as in metros, trams and ferries, and at metro stations.

During the mobility week, Istanbul 1 TV which is a local TV channel, TRTHaber and AHaber which are national TV channels, IMM’s Traffic Radio and Traffic Istanbul Radio (at 87.7 radio frequency) informed public about European Mobility Week and published events organized by IMM during the week via live broadcasts and daily news. Yunus Emre Ayözen who is the Head of Transportation Department of IMM, IMM’s Traffic Manager Hamit Polat, IMM’s Deputy Traffic Managers Esma Dilek and Mustafa Sünnetçi, Muhammed Alyürük who is the General Manager of ISBAK Inc. (affiliated company of IMM) participated to IMM’s Traffic Radio broadcasts, to local/national TV interviews during cycling events and gave detailed information about the activities organized by IMM during the week and the clean, environment-friendly and sustainable transportation solutions deployed in Istanbul by IMM. An expert (doctor) participated to IMM’s Traffic Radio live broadcast to enlighten citizens about the benefits of cycling and citizens who cycle for their daily commutes also shared their cycling experiences in Istanbul.

Interviews were made with citizens during the week to raise awareness about the European Mobility Week, to get feedback about cycling and car sharing and to get ideas and suggestions of people to improve the public transport services in Istanbul. Surveys were conducted on IMM’s Traffic Control Center and Traffic Radio social media accounts (@4444154, @ibbtrafikradyo) and on IMM’s Traffic Density Map application to get opinions of people about car sharing in Istanbul.

Since the opening of schools coincided with European Mobility Week, "I am a sensitive driver" messages were displayed on variable message signs, on opening screen of IBB CepTrafik mobile app and at signalized intersections to raise awareness about students and traffic rules.

All the events organized, dissemination activities and visuals prepared to inform citizens about IMM’s environment friendly, healthy, clean transport solutions and new permanent measures were shared not only via IMM’s mobility week social media accounts but also via all other social media accounts of IMM during the European Mobility Week. Emails informing about European Mobility Week and events organized by IMM were sent to all staff working for IMM.

Deputy Traffic Manager Esma Dilek also provided information about Roadmaps for Energy (R4E) Project to participants during events, which is an EU funded project under the Horizon 2020 programme and aims to develop a new type of energy strategy through visions and roadmaps for the eight partner cities. She shared R4E Project reports with participants so that they could have a better understanding of the project.